Commonly seen winging their way around our Estate are two different species of Birds that are often confused with one another and yet strangely, are extremely different. But yet again, they do have some similarities.

One, the Noisy Miner is a native Australian Bird, the other as the name suggests, is an introduced Asian Bird, the Indian Myna. 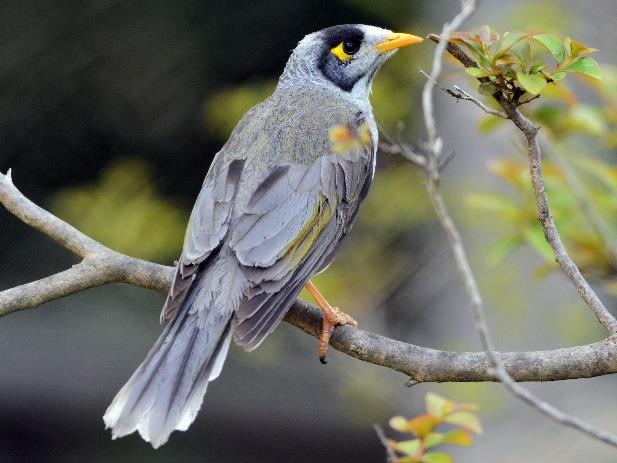 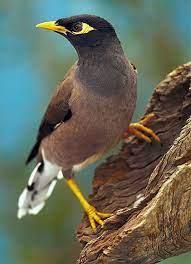 They are from completely different bird species. The Noisy Minor hails from the Honeyeater family, while the Indian or Common Myna is a member of the Sturnidae/Starling family.

Although the body size and shape of the Indian Miner is similar to our own native Noisy Miner, that is where the main physical comparison ends.

The Noisy Miner body is a motley grey. Its wings are a slightly darker grey with yellow flecks and the under parts are whitish. Their beak and feet are a yellowy orange, they have a bright yellow triangular patch just behind their brown eye.

The Indian Mynahs head, neck, throat and wings are chocolate brown with a light green sheen. Their bill and legs are a bright yellow, also there is a white patch on the outer primaries and the underside wing linings.

But what adds to the visual confusion is that large distinctive bare yellow patch behind the eye of both the Noisy and the Indian. These yellow patches enlarge the eye giving the Birds a very aggressive appearance. An appearance that they take full advantage of.

Noisy Miners are without doubt gregarious and territorial; they forage, bathe, roost, breed and defend territory communally, the Noisy is a notably aggressive bird who seems to enjoy chasing, pecking, fighting, scolding, and mobbing throughout the day, targeting both intruders and even some fellow Miners.

The Noisy Miner loves our gardens and eucalyptus trees feedings on nectar, fruits and insects. Very occasionally they will eat small reptiles and amphibians. Food is either taken from trees or on the ground. In keeping with its highly social nature, the Noisy Miner usually feeds in small groups.

The Indian Myna is equally, if not more aggressive in their behaviour. They are known to take over nesting sites, feeding grounds and airways. Attacking, displacing and sometimes killing not only other birds but also small mammals and bats too.

Unlike the Noisy Miner, the Indian Myna are scavengers, residing in urban areas, parks, gardens and streets and will eat almost anything. Surviving well on garbage, scraps, vegetable matter, other bird’s eggs and even eating young hatchlings and small fledgling birds. They follow humans into new suburbs rather than natural variance of vegetation & seasons. Over the past decade, thanks in the main to suburban growth, the Indian Myna has increased its population to such an extent that it became “Australia’s Most Important Pest/Problem”. They have also been nicknamed the “Flying Rats” and due to being introduced to Queensland in 1872 to control the Cane Beetles and Grasshopper, they are often called “The Cane Toad in the Sky”

Another area of difference between the Noisy and Indian is their vocals. Obviously the Noisy by its name is the stronger and superior vocalist of the two. The Noisy has a varied repertoire of communal songs of a 2-3 syllable teu-teu-teu category. Used between them to establish their territory, call alarms to predators and mobbing intruders. This vocal mix starts just before sunrise and will continue to sing, chirp, whistle and chatter through the day. When they want to warn others about possible dangers, their calls become even louder and higher pitched, creating quite a ruckus. While sometimes annoying for us, these guys are great little communicators and can quickly convey important information to the whole group.

By contrast the Indian Myna calls are basic croaks, squawks, chirps, clicks, whistles and 'growls', which are accompanied by fluffs of its feathers and bobs of its head. They also have a loud screech warning when predators are in proximity. In India the Myna are popular as cage birds for their singing and “speaking abilities”. Fortunately, that experience has not been attempted here on their Australia relations.

Even in Breeding there are marked contrasts between Miner and Myna

Noisy Miner breeds communally. Groups include several males and females, and young of previous broods. There are about three males for one female. Males mainly help one another rearing the nestlings. The breeding season is between July and December

Miner’s nests are situated in the forks of trees or shrubs. Females build the cupshaped nest with twigs and grasses. Miners prefers nesting areas surrounded by short grassy spaces, because their young often tend to fall out of the nest too soon after hatching, and this kind of habitat allows adults a better view of predators. Usually, young birds once on the ground spend the time in a bush or low branch, while some family members stand guard to attack any approaching intruders.

The Miner female lays and incubate her eggs alone. Incubation period is around sixteen days. Both sexes care and feed the young, and helpers share these duties with parents. Noisy Miners may produce several broods per season.

In total contrast the Indian Myna are believed to pair for life. They breed through much of the year depending on the location,

The India Myna are known to use the nests of kookaburra, parakeets, etc. and easily take to nest boxes; Nesting material includes twigs, roots, grasses and rubbish. The Myna has been known to use tissue paper, tin foil and sloughed off snake-skin.

It has been recorded that Myna will evict the chicks of previously nesting pairs by holding them in the beak and later sometimes not even using the emptied nest. This aggressive behaviour contributes to its success as an invasive species. The Female will incubate for a period of around eighteen days and both male and female assist in the fledging period of up to twenty-four days.

Although both the Miner and the Myna are relatively common in our neighbourhood, they have yet to start nesting within Sanctuary Lakes Estate itself. But if and when they do, it will be good to know there are actual differences between a Miner and a Myna.