The start of Spring brings back childhood memories of racing to my local park’s pond and searching for frogspawn. Once found, immediately placing a handful into a large glass jar, filling it with pond water plus a couple of leaves of pond weed. Then back to my bedroom where the Jar took a central position allowing me the enjoyment of watching first hand, the wonderful life cycles of those incredible amphibians the Frogs and Toads. But how does this transformation from jelly like eggs to land animal work? To understand this mesmerising metamorphosis, we need to look at each stage of the Frog and Toad’s life cycle. By the way, as far as scientists are concerned, there’s no difference between Frogs and Toads! They have different characteristics, but share the exactly the same family tree. 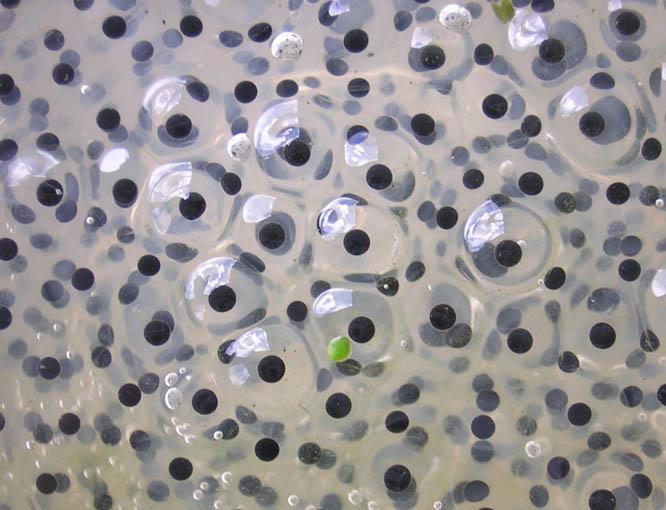 The cycle starts with adult females laying hundreds of tiny eggs, which clump together in groups known as Frog or Toad spawn. In our Estate they tend to be in the still waters of Sanctuary Lake’s fresh water Ponds and Skeleton Creek. Due to the eggs being defenceless and to give them some protection, they’re usually laid amongst the pond’s vegetation just below the surface of the water. Frog’s eggs are laid in round clusters, while Toads come stretched into long ribbons. The baby Frogs start out as tiny black dots surrounded by a jelly-like substance. Over a week or two, the black dots start to become comma-shaped and start wiggling, as their tails begin to develop. 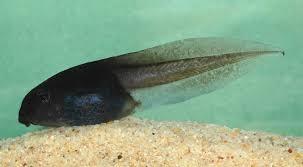 The Tadpole after hatching

Within another few days they will eat up all the jelly and become stand-alone Tadpoles. Just big enough to venture into the watery world. They have gills, a mouth, and a long tail, which are essential for swimming. They now start feeding on plant material that has been filtered in the pond water and within a few more days tearing off tiny chunks from floating vegetation. After a few weeks, a hormone in the Tadpole’s thyroid gland initiates a metamorphosis. This means almost every organ has to change so the Tadpole can go from living underwater to living on land as an adult Frog.

After the hind legs have started to form, a pair of front legs will begin to develop and the tail will start to disappear. You might also notice that the Tadpole has started to form a Frog like face, the skull, originally made from cartilage is gently replaced with bone and the jaw widens to the distinctive ‘frogmouth’ shape with added teeth to assist diet changes.

When the Tadpole reaches this ‘froglet’ stage, it is almost a full adult. At this point, the Tadpole’s gills have disappeared, and its lungs have enlarged. This means it is ready to leave the water and live on land. Once its tail disappears, it becomes an adult Frog.

On our Estate most of the fresh water ponds will, at certain times of the year, echo with Frog and Toad calls. But sadly, the amphibians themselves are relatively difficult to see. There are three good reasons, firstly they are small (4 to 10cms) and beautifully camouflaged. Secondly, when and if they move out of their ponds they will do so at night when its wet and rainy. Finally, they are a favourite food for many animals and birds, therefore hiding in rushes and pond vegetation is important to their survival.

Although frustratingly I constantly hear them around the Estate’s ponds, I have on just a few occasions been lucky enough to have seen three different species of Frog and Toad. Thanks to repeatedly hearing their separate distinctive calls over the years I am fairly certain all three are full time Sanctuary Lakes residents. 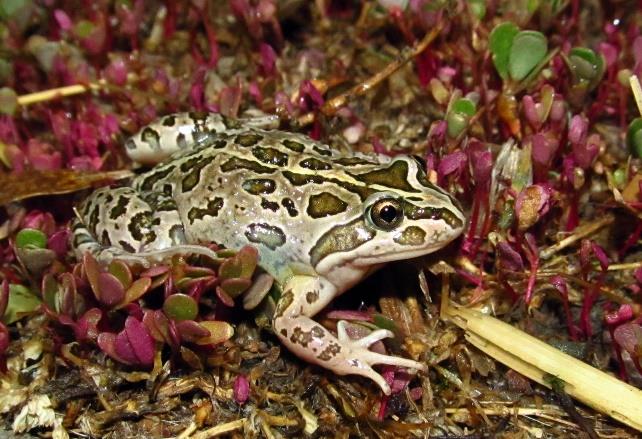 The Spotted Marsh Frog, a smallish-sized frog, growing up to 5 cm in body length. It has a grey-brown or olive-green back with darker olive-green or brown patches. There is often a pale cream-coloured longitudinal stripe along the middle of the back. Distinctive round black pupil eyes with a gold iris. Also has noticeable unwebbed fingers. Spotted Marsh Frogs eat insects, spiders and even small snakes. They are ground dwelling, and most active during the night. During the day they prefer to remain hidden beneath logs, rocks or debris near the edge of ponds and creeks. But what tells us that the Spotted Marsh is plentiful in the neighbourhood is their extremely distinctive call - a fast rapid single ‘click’ sound which I am sure we have all heard around the estate, particularly on an early wet morning or evening. 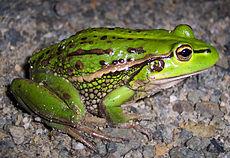 The Growling Grass Frog also known as the Southern Bell Frog or Warty Bell Frog. A relatively large Frog growing up to 9cm. Distinguishing features are bright to olivegreen colour, warty back with brown blotches and a very distinct tympanum or circle ear. The Growly enjoys living amongst dense reeds and swamp grass on the edge of a pond or creek. Their call which is instantly recognisable is a three-part moaning "craw-ork ar-ar", rising and then falling in tone. It has jokingly been described as the sound of a duck being strangled. The Growly is believed to be in decline across some parts of Victoria, but regularly hearing its common call, it sounds well established around our Estate. 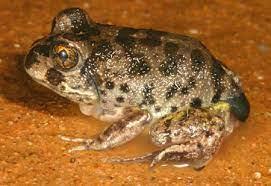 The Spade Foot Toad is actually a Frog but the mix up is due to its short legs and crawling movements rather the long-legged hoping of other Frogs. Spade Foot is a burrowing Frog and remains buried for half the year, becoming active in Spring and Summer. It is identifiable by its vertical pupil and fully webbed toes. Its skin colour is highly variable, from blotchy grey to dark brown with numerous warts. It is a small frog growing to about 4cms. It has one very distinguishing feature that is its extremely musical call. It has a slowly pulsed vibrato trill “craa-aw-aw-aw-aw-awawk”

The Spring has rolled out a warm and showery start for our small, but noisy, charismatic amphibious neighbours. With a little patience, it can become a real pleasure to be able to listen and watch first hand, one of nature’s truly miraculous breeding cycles.