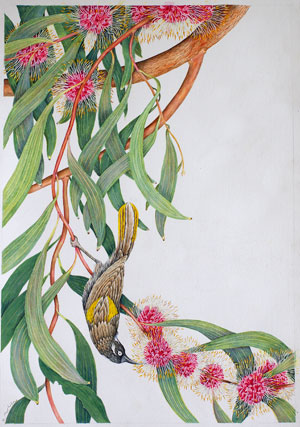 The residents of Sanctuary Lakes are extremely lucky to be surrounded by an amazing variety of Flora and Fauna. Not only are they in our own Gardens, Parks and Golf Course, but display their magnificence in our surrounds of Skeleton Creek, Point Cook Homestead and Reserve, the Cheetham Wetlands and the Maritime Park.

The sheer numbers of different species of trees, from the stately boulevard Birches, to the multitude of Eucalyptus, the rare to the ubiquitous ground covers and grasses, the diversity of lake and sea plants. The huge multiplicity of waterbirds, species of land birds, fish, reptiles and mammals. All are our neighbours and we are fortunate to be able to share a daily harmony with them.

The aim of Nature's Rubik Newsletter is to shine a monthly spotlight on Sanctuary Lakes' wonderful array of flora and fauna.

First up and using the Botanical Illustrator Rita Parkinson's painting inspired from her Sanctuary Lakes gardens, are the Hakea and the New Holland Honeyeater.

The Hakea is an Australian native with a genus of 149 species of shrubs and small trees. The genus illustrated is the popular Pincushion variety Hakea Laurina which has been liberally planted around the Estate and grows particularly well in our mixed soils.

Hakeas are named after Baron Christian Ludwig von Hake, the 18th century German patron of botany. Hakeas are closely related to the genus Grevillea and Finschia, within the family Proteaceae. Hakeas are easily distinguished by their woody seed pods.

At this time of the year the Pincushion Hakeas are bursting with blooms and their distinctive nectar filled flowers are attracting one of their key pollinators, the New Holland Honeyeater.

The New Holland Honeyeater was among the first Australian birds to be scientifically described in 1781. It is around eighteen centimetres long and is mainly black, with a white iris, white facial tufts and very bright yellow margins on its wing and tail feathers. It is a very active bird and rarely sits long enough to give an extended view. It thoroughly enjoys life at Sanctuary Lakes and small flocks of six or more can be seen by their distinctive bright yellow wing tips diving around the Hakeas and Grevilleas, drinking the nectar, and catching the flies. You can often see them noisily feeding furiously around the Hakeas in the Golf Club's Car Park.