The diverse Eucalypt tree family dominates our landscape. From the bush to our backyards, paddocks, parks,roadways and pavements. Commonly called gum trees,Eucalypts are the icons of Australian flora. 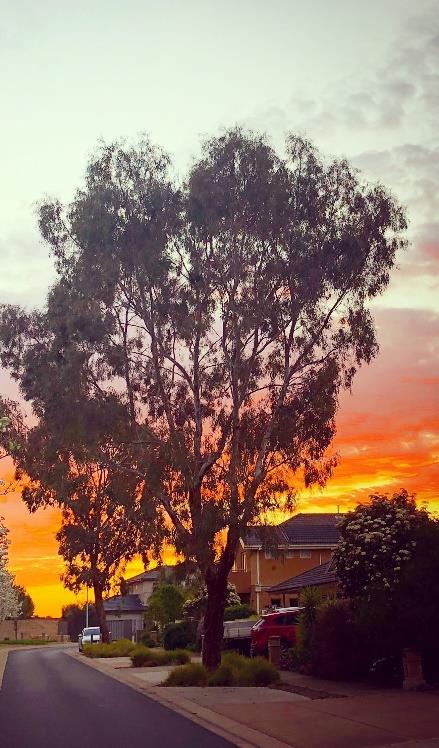 Recently discovered fossils indicate that the Eucalypts have their evolutionary roots in Gondwana, when Australia was still connected to Antarctica,some 150millionplusyears ago.As Australia drifted north Eucalypts adapted to drier climates, weathered soils and a fire-prone landscapes.The remarkable ability to quickly re-sprout from dormant buds located under the bark following damage from drought or fire,is a feature that has helped them to survive and dominate the harsher environments that evolved with Australia's changing climate over the last 30 million years or so.

Today, botanists have identified around 900 species of Eucalypts and have divided them into three different groups:

Eucalyptus: The most dominant in Sanctuary Lakes and makes up nine of our species;

Angophora:The Eucalypt tree that dominates Sanctuary Lakes North and Southern Boulevard. Previously our Angophora trees were discussed in Nature’s Rubik:The Boulevards which is featured below. 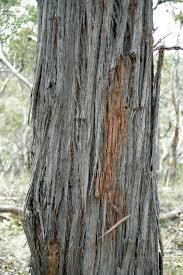 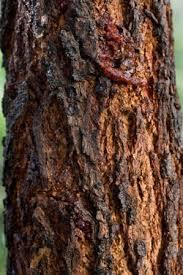 One of the simplest means of recognising species and the most distinctive features of Eucalypts,is their bark.

Some trees have smooth bark —as the tree grows it sheds old layers from its trunk or branches. The new bark underneath is often brightly coloured that fades over time.

Other trees are completely covered in rough bark. The old layer of bark stays attached to the tree and forms a thick protective layer against fire. Rough barks can be a bit trickier to identify because the texture can take different forms. 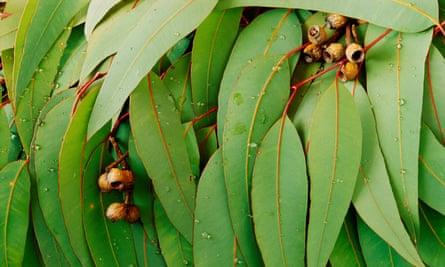 Eucalypts are evergreens. The leaves are thick, leathery and do not easily wilt. This enables them to survive hot and dry conditions.Aeucalypti’s leaves are packed with oil glands that produce their distinctive scent.These compounds help protect the tree from attack by pests. Eucalyptus oilis readily distilled from the leaves and can be used for cleaning as an antiseptic, for deodorising, and in very small quantities in foodsupplements, especially cough drops. It’sinsect-repellent properties are used in mosquito-repellents. 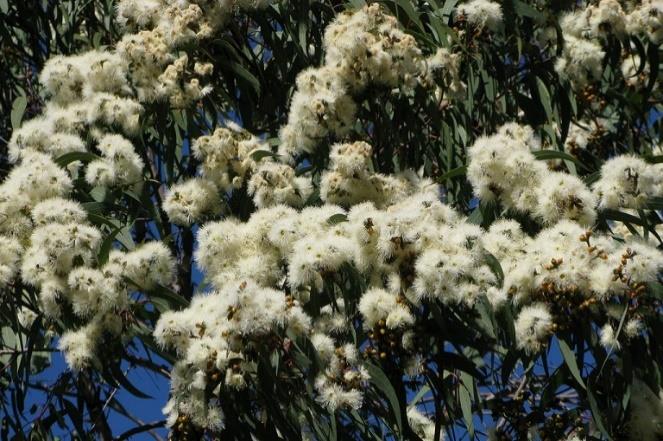 The most readily recognisable characteristics of Eucalyptspecies are the distinctive flowers and fruit ("gumnuts"). Flowers have numerous fluffy stamenswhich may be white, cream, yellow, pink, or red; in bud, the stamens are enclosed in a cap.Thus, flowers have no petals, but instead decorate themselves with theirmany showy stamens. As the stamens expand, they will split away from the gumnutbase. The gumnutsare roughly cone-shaped and when matured will open to release the seeds.

Besides the Boulevard’s Angophora, Sanctuary Lakes has fourteen other species of Eucalypts maturing in streets and parks. 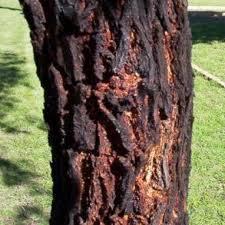 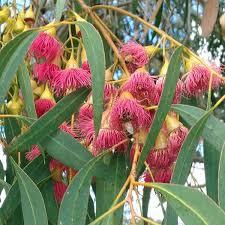 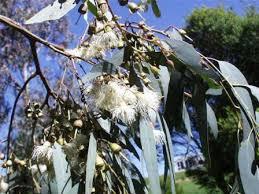 Eucalyptus sideroxylon or Red Iron Bark, which lines the streets of Heron Way and the Coastal Promenadeis one of the most easily recognisablethanks to its distinctive trunk. It has avery dark brown to black coloured bark which is deeply furrowed and does not shed.The dark fissured bark persists to the branches.Its wood is extremely dense and gets its common name Iron Bark becauseofits high density and like iron,it cannot float in water. The leaves are a bluish grey colour on both sides and lanceolate to falcate in shape. When the sun is shining on the leaves the contrast between the dark barktrunk and branches against thebluish leaves is quite stunning.

Clusters of fluffy classic Eucalypts polystemenous flowers are produced between April and December. The flower colour varies with itsform from creamy white to pale pink to a deep rosy crimson. 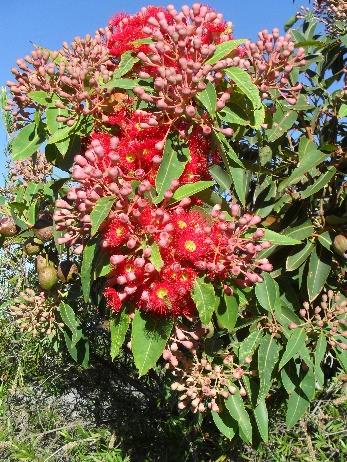 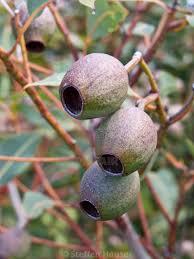 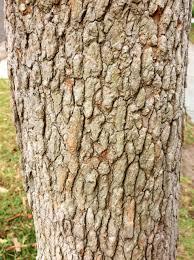 Due to is smallish size,another easily recognisable Eucalyptthat can be seenin the streets of Swingers Green and Eagleview Placeis Corymbia ficifolia or its common descriptive name the Wildfire Flowering Gum.

This is a tough and compact Eucalyptwhich puts on a brilliant display of fiery red flowers throughout the summer months, providing an abundance of food for nectar loving birds. Again,the trunk is a distinctive greyish brown and is lightly furrowed. This variety forms a dense canopy consisting of numerous branches and large, glossy dark green foliage which is highlighted by the lighter green undersides of the leaves. During the warmer months new foliage emerges with a reddish tinge. 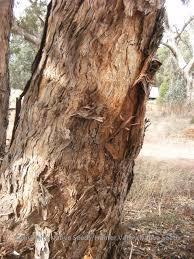 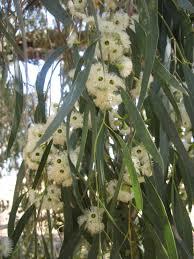 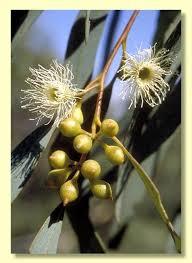 Adjacent to Breezewater in Freshwater Point Park is a standof some twenty splendid Eucalyptus melliodora also commonly known Yellow Box Gum. These trees are medium to tall growersand again,immediately distinguishable for its unusual bark which varies from smooth to rough all the way down the trunk. Often the bark varies presenting an array of colours including grey, yellow, red and brown and occasionally, can be very dark and rough.The foliage is grey-green and elegant.The flowers are the greatestattribute of these trees, very fragrant, white-to-creamandflowering in spring through summer. Not only are theyclassic Eucalyptusflowers, but their production is so impressive. I have been told that you are able to hearlarge flowering Yellow Box Gumsbecause of the swarmsof bees that areenjoying its bounty. Needless to say, it is a fantastic tree for honey production.

There are numerous more Eucalypts thriving in Sanctuary Lakes and I will return to these Australian icons in a future Rubik. But before I concludethere is another Aussie Icon linked to the Eucalypts whichcelebrates over a hundred years of being an Australian Classic and that of course is May Gibb’s children’s stories-based on Eucalypts, the Gumnut Babes. 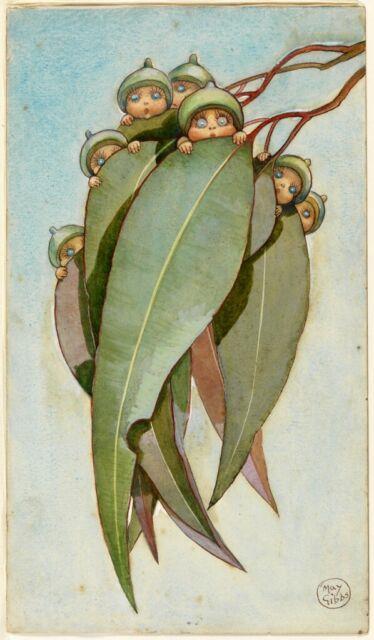 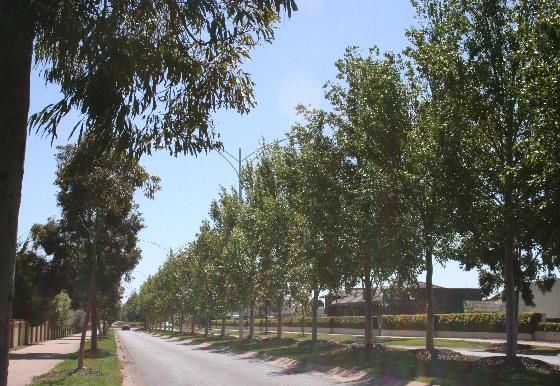 Originally estateswere built for the wealthy Lords and Masters. Visionary landscapers like Capability Brown and their teams of gardeners would design and rebuild vast acreages for the “gracious living and enjoyment” ofa single family. Fortunately in our egalitarian age,estatesare being built and designed for the gracious living and enjoyment of communities.One of the original community estates in Europe and developed in the 1920s which has echoes in our own Sanctuary Lakes isthe Wentworth Estate, with its now legendry Wentworth Golf Course and Virginia Lake. The European estates are hallmarked by their Boulevards. Although only recently established, a walk along the circuit of Sanctuary Lakes North and South Boulevard, should convince the sceptical that in avery short time the Lakes Boulevardswill challengemany of the famed European estates.

One of the keys to thevisual success ofthe Lakes Boulevardsis itssimplicity. There are only fourmain floraelements. Two species of trees the Simon’s Poplar (Populus Simonil)a deciduous treeplanted along the median strip andthe Smooth-barked Apple Myrtle (Angophora Costata) on the footpaths. Two species of flowers that decorate the roundabouts and footpaths are the White Carpet Rose (Rosa noashnee) and the Iris, (Dietesgrandflora).

The median strip’s Simon’s Poplar are also known as the Chinese Poplar, and as the name suggests, a native of North West China. A deciduous tree with a mature height of 12 metres and a compact width of 3 to 4 metres, which makes it an ideal decorative tree for a median strip. It has a smooth,straight,whitey grey bark trunk,with leaves that range from a bright green in spring to wonderful warm yellow in autumn. Its flower is a very small (less than 30mm) catkin. Themajority of the Boulevard’s splendid militarystanceSimon’s Poplar trees are edging towardsmaturity with probably another couple of metres to grow

The footpath’s Apple Myrtle(Angophora Costata)is also known as the Rose Gum. Itdiffers from the majority of gum trees in the fact that although very closely related,it is not a Eucalyptus. Itis a large, wide, spreading tree reaching a heightofbetween 15 and 25 m. The trunk is often gnarled and crooked with a pink to pale grey, sometimes rusty-stained bark. The old bark is shed in spring in large flakes uncovering the new beautiful salmon-pink bark which slowly turnsto a pale grey before the next shedding.

Unlike Eucalyptus, Angophora have dull-to glossy green leaves 5 to 15cm long and 1to 5cm wide, which distinctively grow opposite each other along the stem. Flowering time is December to January; the small flowers are white and very showy, being produced in large bunches The individual flowers are about 2 cm wide with five tooth-like sepals, five larger semi-circular petals, and a large number of long stamens. The seed capsules are goblet shaped, 2 cm long and as wide, often with fairly prominent ribs. 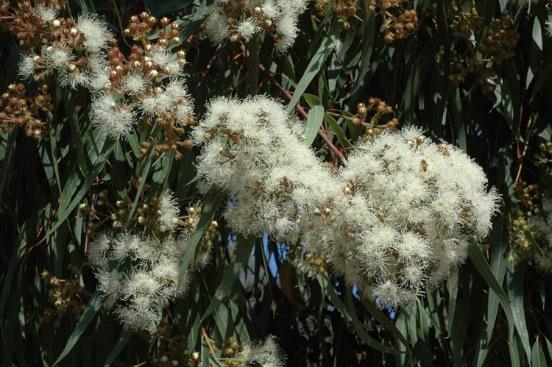 Apple Myrtle grows into a large and long lived tree,some have been reported to beover 150 yearsold. Besides looking splendid they are great attracters of native birds particularly the Lorikeets, Rosellas and Parrots. They not only enjoy the flowers and gums but duetothe trees habit of discarding its branches,which leaveholes in the trunk, therebymakingperfect living quarters for the birds.Already you can notice pairs around the Boulevards, hopefully over the coming years that will increase exponentially and flocks of native birds will become a common sight. 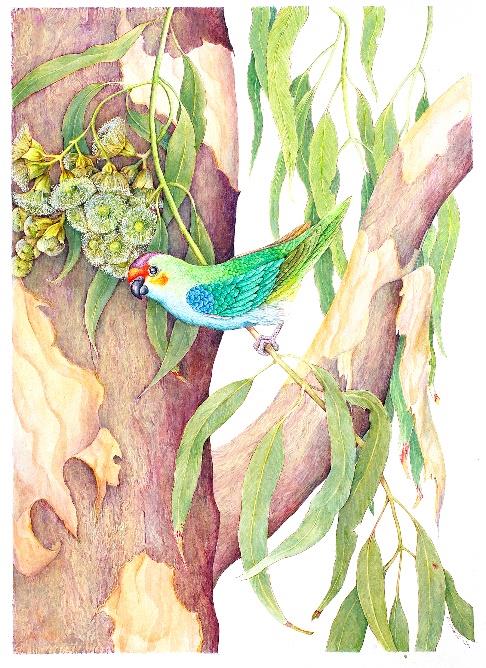 Rita Parkinson’spainting of the Apple Myrtle (Angophora Costata)showing the leaf structure, bark, flowers and seed capsules with a purple crowned lorikeet checking out the neighbourhood.

They flower in abundance during summer, especially after rain. Each flower lasts three days. The flowers attract plenty of insects, including bees and beetles, which in turn serve as food for insectivorous birdssuch as the Sand Martins and Swallows.After the Flower’s petals, fall they are followed by 5 cm long green capsules that contain very dark brown seeds, whichdispersewhen the capsulesplits open.The Wild Iris grows vigorously and in certain parts of Australia it is considered a noxious weed, but thanks to Sanctuary Lakes hard working gardeners our plants are controlled and add an informal texture to the Boulevard. 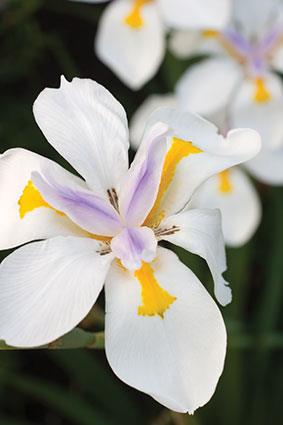 Rosa Noaschnee, also known as the White Carpet Roseis part of the Rosagenus and is a Rosevariety. It grows mainly as a Perennial, which means it typically grows best over a long period (from 3 years+). TheWhite CarpetRoseis known for its Shrub habit and growing to a height of approximately one to two metres.It has a long flowering period, producing masses of double white flowers. On the Boulevards ithas been planted on the roundabouts, footpaths and as subtle screener ofsome of the more obtrusive road elements. 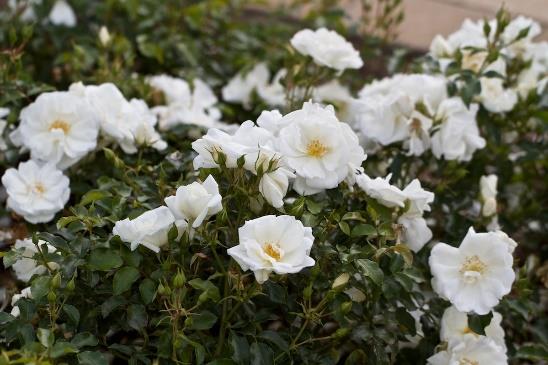 Sanctuary Lakes Head of Maintenance Greg Fryer and the brilliant team of gardeners are keeping and at times improving, the original vision of the Boulevards. Even at this early stage we are beginning to see a magnificent streetscape. It is not difficult to imagine their future growth not only with the maturing flora but with the flocks of native birds mingling through the neighbourhood. A walk around the circuit of the Boulevards will take about two hours and it guarantees to be healthy for the body and relaxing for the mind.