Of all Australian Native Birds, the Black Swan is probably one of the most iconic and easily recognis able. As the name suggests the body of an adult Black Swan is mostly black, except for its broad white wing tips, which are visible in flight. Its eyes and bill are bright red, with the bill having a pale white tip and bar. Its webbed feet and shortish legs are greyish-black. The neck is long (the longest neck amongst swans, relative to its size) and it is curved into an "S"-shape. The males are slightly bigger than the females, and have a longer and straighter beak. 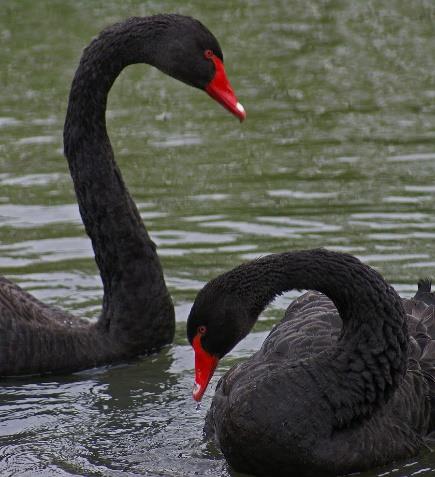 Sanctuary Lakes is always hosting flocks of Black Swans throughout the year, sometimes building to over two hundred birds in our summer months. Now as winter fades the swans start pairing up with courtship behaviour, nest building and by the end of August and early September, egg laying and cygnet hatchings. Already at the north western end of our Lake, a pair with five healthy cygnets have arrived which is an early hatching for the southern Black Swan. 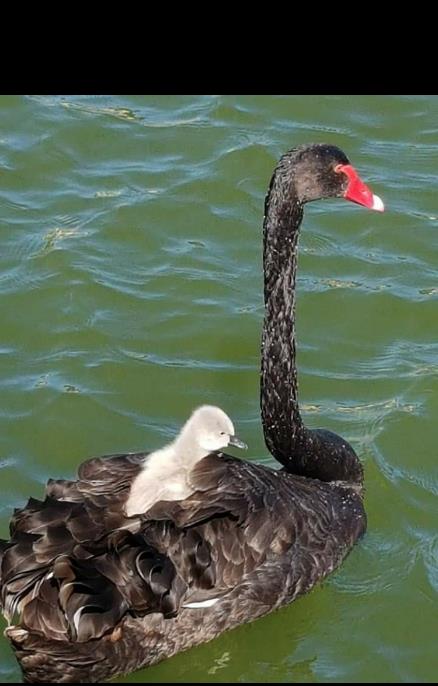 The Black Swan is also an important symbol in modern culture,as the initiator of the scientific philosophical occurrence entitled the Black Swan Event. Our bird plays a starring role in all this owing to a belief in Europe, dating back 2000 years to Roman poet Juvenal, that all Swans were white. Like red herrings and white elephants, the Black Swan became a symbol of what was impossible. In medieval Europe, unicorns had more credibility. But when Dutch navigator Willem de Vlamingh found Black Swans in Western Australia in 1697, he turned medieval science upside down by showing how risky it is to declare that something is impossible. The philosopher John Stuart Mill, writing in A System of Logic in 1843, used the statement “all swans are white” to show how large numbers of consistent observations can encourage a wrong deduction.The mid-twentieth century philosopher Karl Popper used the “black swan fallacy” to show that high-profile, hard-to-predict, and rare events are beyond the realm of normal expectations in history, science, finance, and technology.

But for over a decade Melbourne University, under Professor Raoul Mulder, has reversed the position, with science now studying the Black Swan’s behaviour, breeding, biology and movements. 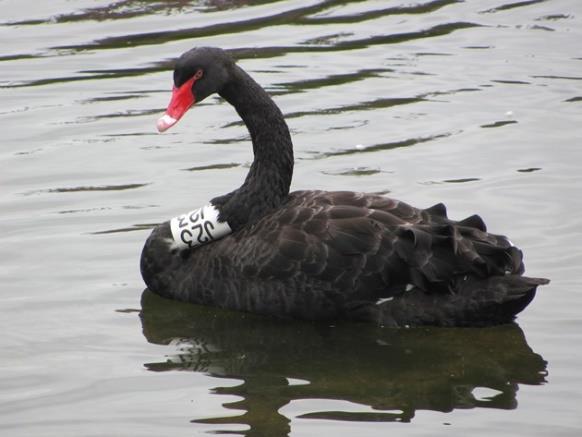 A science citizen. A female swan wearing a tagged collar

From their base in Albert Park, Professor Mulder’s team has fitted out young Black Swans with a special wildlife tag, a uniquely-numbered neck collar, as seen in the picture above. This allows them to identify individual birds from a distance and track their histories, movements and fate.

The first major confirmation of their study was that Black Swans are not migratory but strongly nomadic, moving erratically and varying distances in response to water availability, and this posed an obvious challenge for their study.

The problem was how to go about tracking the Swans when there was no way of predicting where they might go?

Fitting every bird with a satellite tag would be prohibitively expensive. Luckily, there are 20 million pairs of human eyes scanning the Australian environment every day. Members of the public are encouraged to join the ranks of citizen scientists and submit their sightings of collared Black Swans to the research team’s website www.swan.org.com. All that is required is some simple details about the “where”, “when” and “who”. In return the citizen scientist receives instant feedback on “their” Black Swan, such as when it was first tagged, who it is paired with, and where it has been recently. They can then follow the swan’s movements there after.

Amazingly Melbourne University’s research has in turn, produced some Black Swan Events. For example, it was always thought that in the main Black Swans were socially monogamous and romantically, that they paired for life. When Professor Mulder’steam studied the breeding ecology of Black Swans, they discovered unexpectedly high levels of extra-pair paternity. The team estimated that up to a third of Black Swans are homosexual and that nearly a quarter of all Black Swan pairings are same-sex couples. These couples are almost always two males getting together. These males sometimes steal a nest from a heterosexual couple and raise the young as their own or one male copulates with a female and once, she has laid her eggs they chase her away and raise the chicks themselves. Scientists believe there is a biological advantage in this behaviour as it appears that there is a higher survival rate amongst cygnets raised by male-male couples than by male-female pairs. This may be due to the fact that there is an additional male to protect them and that having chosen to be parents they are more caring than heterosexual pairs. 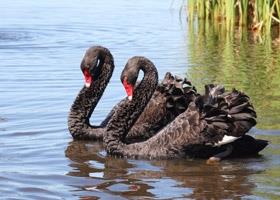 In a study relating to other forms of communication, the team examined the function of triumph ceremonies. These occur when a male attacks a rival suitor, then returns to his potential mate to perform an elaborate ceremony while posturing and calling. Paired black swans regularly perform triumph ceremonies, most of which are initiated by the male. The team found that the presence of dependent cygnets did not affect the frequency of ceremonies; however, feeding experiments showed ceremonies increased when many swans were in close proximity. Pairs also performed triumph ceremonies in response to the playback of a triumph ceremony by another pair.

Through observation the Team also noted that the Australian Black Swan only swims with one leg, tucking the other leg above its tail. The reason for this may be that the swan can more easily change direction when swimming on the surface of the water, if needed to escape an oncoming predator or to more quickly get to food.

Another study was based around the functioning of feathers and it was found that Black Swans will molt annually: It was observed that after breeding, Black Swans lose their winged flight feathers, rendering them unable to fly for about a month. During this time, they will usually remain on large, open waters for safety. Hence the increase in Black Swans on our Lake in Summer.

Now with all this new insight standing by our lake and watching the Black Swans, an old adage comes to mind.