Regularly, in our gardens we see small to medium sized Birds whose shape and looks are very similar yet when we inspect closely, we can see some are speckled all over, others spotted underneath, some a simple light brown, others darkly coloured.
Clearly different, yet all having a basically similar look.

They are of course Thrushes. Thrushes are distributed throughout the world and they are all members of the passerine bird family, Turdidae. We have four different species of Thrush living here with us in Sanctuary Lakes. Thrushes mainly eat insects, plant nectar, berries, fruits and a few enjoy earthworms, snails or even spiders. They pay nature for their keep by the regurgitation of plants seeds.

Contributing to the dispersal of numerous plant species that assists in the recovery of our ecosystems.

Of the four Thrushes resident in Sanctuary Lakes, one is a native Australian and the other three UK immigrants from the 1850s. The first one is an early immigrant who is the most often seen in Sanctuary Lakes and just to mystify us, it doesn’t bear the name Thrush but the confusing title of “the Common Blackbird” 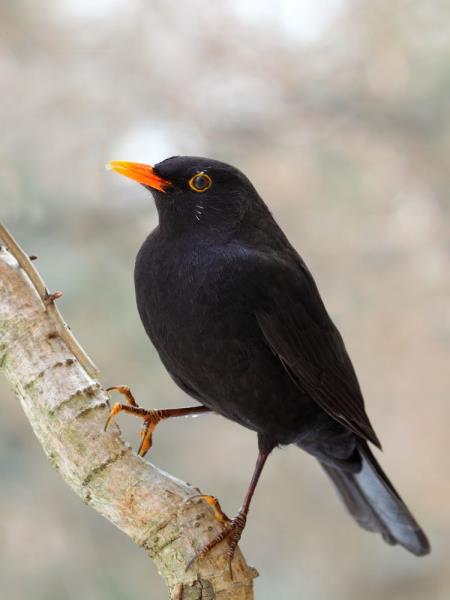 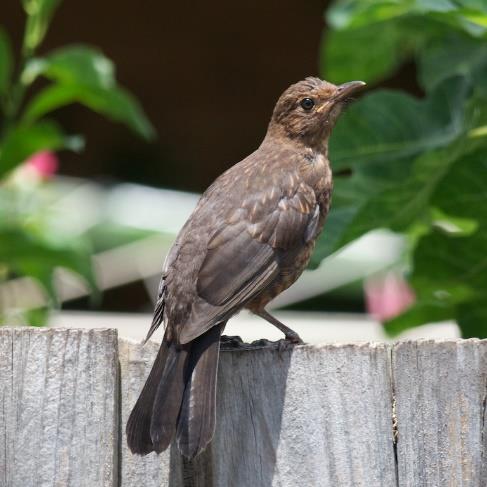 Despite its name, Common Blackbird is a true Thrush and is much smaller in size to other birds with the Blackbird name such as Crows, Ravens, Jackdaws. Only the adult male is Black with a distinctive yellow eye ring and bill. The female and juveniles have a mellow dark brown plumage with some streaks and mottling mainly on the underside with a dark bill and legs.

Blackbirds tend to be a shy species, spending much of their time close to cover either foraging in leaf litter, mulch or grass or within shrubbery. Movement across the ground is by jerky hops often followed by wing and tail flicks. They tend to fly fast but undulating and low to the ground.

The nest is made of grass and mud, and lined with soft vegetation. The female builds the nest in about three days, often within the dense foliage of small trees and hedges. Incubation takes 12–14 days before the 3-5 chicks are hatched naked and blind. Fledging for another 10–19 days, with both parents feeding the young. Blackbirds are very territorial in the summer breeding season, but more gregarious in winter with small groups seen feeding together.

The Common Blackbird is well known for its Vocal abilities which give forth to varied and melodious, low-pitched fluted warbles. Throughout the ages their songs have been part of Popular Culture ranging from the middle ages nursery rhyme about four and twenty Blackbirds in “Sing a Song of Sixpence” to the sound of a Common Blackbird heard singing on the aptly named Beatles classic "Blackbird" 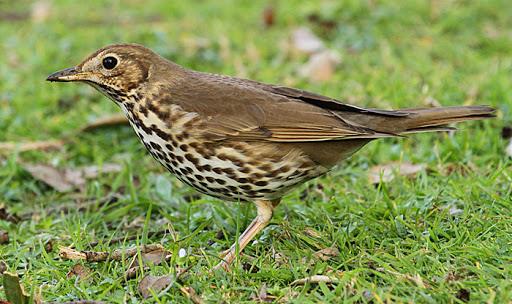 The Song Thrush was released in Melbourne in 1863. Besides Sanctuary Lakes, the Song Thrush can be seen mainly in Melbourne’s West and North West suburbs. Strangely, it is rare to be found anywhere else in Australia outside that small Melbourne district.

The Song Thrush is a small Thrush (20-22cms). Males and females look alike and have brown upperparts and black-spotted cream or buff underparts. Their bills are yellowish with their legs and feet being pink.

Song Thrushes do not form flocks, although as seen in Sanctuary Lakes, several birds may be loosely associated together.

The Song Thrush nests in bushes or hedges, laying four or five eggs (bright glossy blue with black spots) in a neat cup-shaped nest lined with clay. The female Song Thrush incubates the eggs for about 14 days. The young fledge in about the same time. Song Thrushes may raise 2 or 3 broods in a year.

The male Song Thrush enjoys singing its loud song from high perches. Their song characteristically repeats melodic phrases. Its habit of repeating song phrases distinguishes it from singing Blackbirds. This distinctive song style has through the ages frequently been referred to in poetry.

That's the wise thrush; he sings each song twice over,
Lest you should think he never could recapture
The first fine careless rapture! 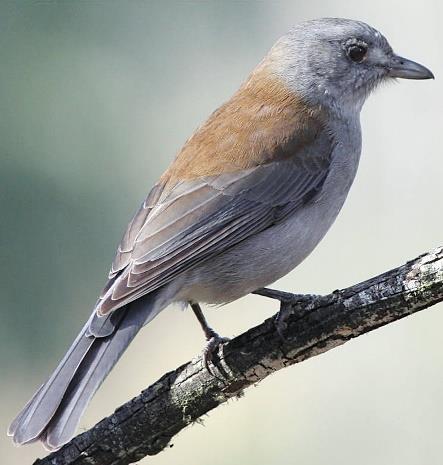 Formerly known as the ‘Harmonious Thrush’, The Grey Shrike-thrush is considered to be one of the best songsters in Australia with numerous different short, four to eight notes, harmonic, melodious songs. Both Male and Female have relatively similar colouring with an olive-grey back, and pale grey-white cheeks and underparts. The male has a dark strong pointed Bill while the female’s bill is equally pointed but a pale grey.

The Grey Shrike-thrush normally forage in pairs for food on the ground. Generally around fallen logs, or on the lower limbs and trunks of trees. Besides the usual Thrush diet the Grey Shrike eats frogs and lizards and is a notorious predator of other bird’s nests eating their eggs.

Shrike-thrush seem not to mind friendly humans and will nest in nearby garden trees and hedges, even in carports, sheds and verandas. The nest is a small cup-shaped structure of dried vegetation, and may be constructed in the same site year after year. Both birds share the nest-building and incubation duties, and both care for the young birds. The pair may re-nest after the first young fledge, and then repeat – sometimes three times if conditions are ideal. 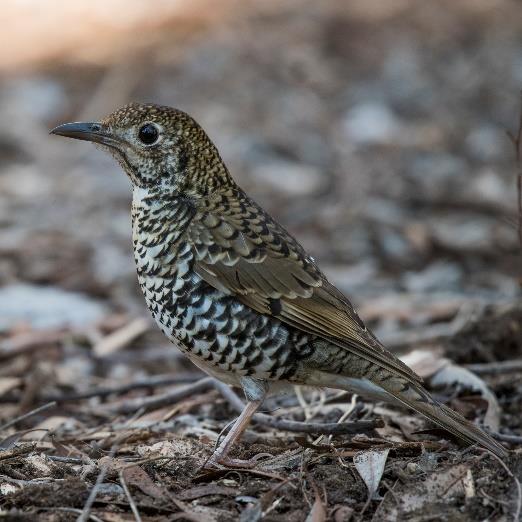 The Bassian Ground Thrush is a native Australian. A secretive, shy bird, coloured with subtle brown and cream feathers. It has scalloped black crescent-shaped bars dotted down its back, rump and head.

If disturbed, the Bassian Thrush crouches low, runs a short sprints and hops, into cover, then remains motionless and avoids detection due to its mottled plumage providing perfect camouflage.

When foraging, the thrush often stands still before dashing forward and then vigorously jabbing its sturdy bill into the ground to seize a worm. When males are foraging, they can carry up to five or six very large worms at a time.

Unlike other Thrushes the Ground Thrush breeds in winter when their favourite food – earthworms – are easier to find. The Nest is often built in a tree or branch’s fork or crevice. It is a large bowl-shaped structure, made with bark strips, twigs, stems, grasses and leaves. It is lined with moss and fine grass.

Female lays 2 to 3 pale eggs, green or bluish-green, with fine markings. Incubation lasts about two weeks. Young fledge 14 days after hatching. Both parents share the nest-duties and care for the young.

This species produces two broods per season, and may reuse the same nest for several seasons.

The Bassian Thrush’s song is gentle, with warbling and trills carrying a short distance. We can also hear fluted two-notes whistle, often continuing as a melodious warble similar to the Blackbird’s song. Bassian Thrush sings mainly at dusk and dawn.

Finally, writing about Thrushes and their songs reminds me of one of my childhood favourite London Cockney Slang Tongue Twister…….