The seasonal cold, wet and windy weather, signals the arrival of Sanctuary Lakes feathered winter visitors. These tend to be birds who normally spend the majority of the year in the higher upland forests and woods, but who often migrate in the winter to urban coastal areas for a stable food supply, safety and security. These visitors tend to separate from their summer breeding flocks and arrive at the Estate in singles or pairs and sometimes even a tiny family group.

These extremely small groupings make it difficult to catch up and meet with some of the visitors, but luckily, I have help from Sanctuary Lakes keen eyed bird aficionados. My first winter visitor “Tip Off” came whilst queuing at the local chemists. Two charming local residents told me that a pair of Currawongs were noisily visiting their gardens, in the gated Jardin community. 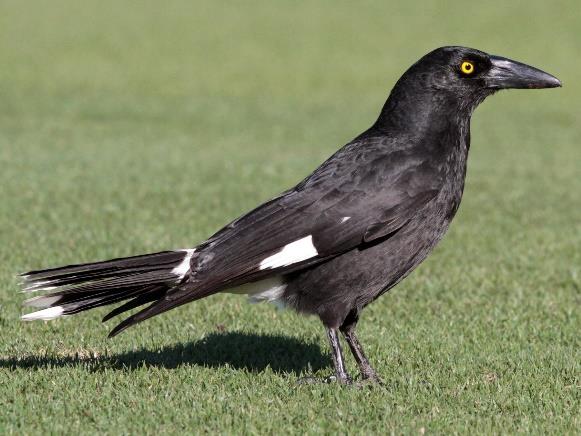 Next morning, I slipped into Jardin via the Golf Course and almost immediately I heard the loud cries, croaks and screeching yodel sound, repeating the call “curra…wong” from which the bird gets its name.

The Pied Currawong is an Australian native. A large (50cm), mostly black bird, with a bright yellow eye. Small patches of white are confined to the under tail, the tips and bases of the tail feathers and a small patch towards the tip of each wing. It is often mistakenly confused with the Raven or Magpie. Currawong has nowhere near the number of white patches as a Magpie and has much shorter legs. They are similar in size and plumage to Ravens, but they are slimmer and have much larger and stronger bill. But what makes them readily distinguishable from Magpies and Ravens is their comical flight style in amongst foliage, appearing to almost fall about from branch to branch as if they were inept flyers.

The Jardin bird watchers told me that the Currawong seem to enjoy being a dominant bird that can noisily drive off other species even from their temporary residence.

Pied Currawong hunts mainly in trees and on the ground, searching for a wide variety of food, such as lizards, insects and berries. In the breeding seasons it is known to take chicks from other species nests. In Sanctuary Lakes it feeds comfortably on our large winter supply of berries and small vertebrates.

My second “Tip Off” was from a fellow wanderer who told me at sunrise that morning he had been looking at what he thought was a short stumpy branch of a Eucalyptus Tree when it suddenly grew wings and flew off. I thought that sounds familiar, but it took me five early morning visits to the area before I saw and confirmed that it was indeed that master of camouflage, the Tawny Frogmouth 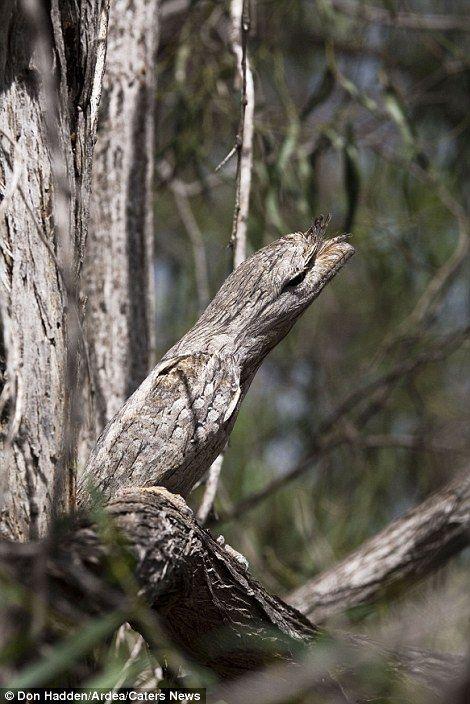 Tawny Frogmouths are large birds (40-50 cm) whose plumage is a finely streaked mottled grey and brown. Their wonderfully designed feathers give the Tawny a perfect camouflage and when they stay statue-still on a tree branch, they can appear to be part of the tree itself. They often choose to perch near a broken tree branch and thrust their head at angle, further mimicking a tree branch.

Although Tawny Frogmouths are often referred to as owls, they are not. In fact, they are more closely related to nightjars than owls. But they do resemble owls with their large eyes, soft plumage and camouflage patterns, both owls and Tawnies are mainly nocturnal with both hunting at night.

Unlike owls, Tawny Frogmouths do not have powerful feet and talons with which to capture prey. Instead, they prefer to catch prey with their beaks. Their soft, wide, forward-facing beaks are designed for catching insects. They will also feed on small birds, mammals and reptiles. This larger prey when caught, is held in the bill and beaten against a branch before swallowing. Most of their hunting is done in the first few hours after dusk and just before dawn.

The third “Tip Off “came from a member of the Golfing fraternity who enjoys an early winter sunrise walk around the third and fourth fairways and the linking areas to St Andrews Square. He told me that recently on a couple of occasions he had heard a strong, impressive low and rather mournful sounding double-hoot. Each hoot lasting a few seconds, broken by a brief silence with the second note always being a slightly higher pitch. He said it sounded like an Owl, I think he was correct as the loud two note hooting sound seemed typical of the Powerful Owl. 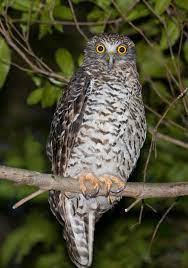 The Powerful Owl unlike the Tawny Frogmouth is a genuine Australian Native Owl, in fact the largest Owl resident in Australasia with an adult height of over 60cm and an impressive wingspan of 140cm (almost the same length as our social distancing requirements!). Strangely, Powerful’s have a relatively small head, but with hypnotic round yellow eyes, set in a dark grey facial mask. The legs are feathered with massive yellow to orange feet, with large, sharp talons.

The Powerful Owl usually inhabits the moist upland forests of Victoria, but never more than 200klm from the coast. Its main item of prey are small mammals particularly Possums and Bats.

Locally I observed my first Powerful Owl at the Werribee Treatment farm and then last year at the Point Cook homestead. Although over the last couple of weeks I have heard around the Estate the distinctive Powerful Owl call, I have yet to see it physically. Mainly due to the early morning winter sun so far, has not been strong enough to lighten the upper canopy of their favourite Gum Trees. Deakins University who have attached tracking devices to the Powerful Owl are following their movements around Victoria and they confirm that they are visiting our area. One of the unusual discoveries from Deacon’s study is that Powerful Owls in suburban areas enjoy visiting Golf Courses particularly those with fresh water ponds and creeks. I would say Sanctuary Lakes Golf Course fits the Powerful Owls lodging requirements quite adequately.

These three visitors, The Currawong, Frogmouth and the Powerful seemed to have joined the other 90 plus bird species that regularly visit or call our Estate home. Making the point that as our Resort matures, our Birdlife continues to develop and grow, making a pleasurable contribution to all of us who live in the Sanctuary Lakes Estate.