Nature Rubik: Our Kingdom of Ants

Possibly due the strange summer weather patterns this year, there seems to have been a large invasion of Ants on our Estate. Which raises the obvious question, who and what are the Sanctuary Lake’s Ants? 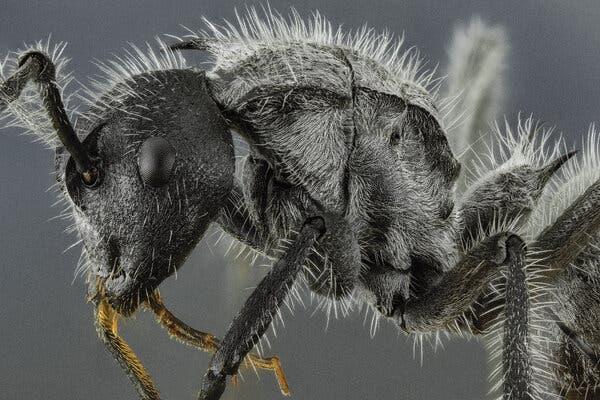 We share our world with at least 15,000 unique species of Ants — although this could be an underestimate, as we have no way to count the number of species still unknown to science. Even in Australia there are believed to be over one thousand known species of Ants. It is hard to express how ubiquitous they are. If you were to put all the animal life in Australia on a weighing scale, more than fifteen percent of the weight would come just from our multitude of tiny Ants. Even walking around our densely built Cities and Towns the pavements conceal teeming armies of Ants doing the invisible work of making our food crumbs disappear by the kilo.

Ants belong to the family Formicidae, within the order Hymenoptera. This order also includes bees and wasps. Ants are of ecological importance for their roles as predators and scavengers, in seed and pollen dispersal, plus soil structure.

Only a handful of Ants (mostly introduced species) are considered pests. Pest ants often nest in and around buildings, congregate in food preparation areas and have the potential to spread disease.

Most species of Ant have three distinct body segments: head, thorax and abdomen. Small, constricted abdominal segments (the pedicel) connect the thorax and abdomen, giving the ant a ‘waist’. Ants have compound eyes and ‘elbowed’ antennae.

Ants communicate with each other using chemical signals called pheromones. Ants use pheromones to leave trails for food sources, to send alarm signals for help and to differentiate between caste groups. Pheromones are detected by ants through their long, thin antennae, which can also perceive smells. Some species also have three simple light-detecting eyes, called ocelli, to help them fly and navigate, in addition to the standard two compound eyes. 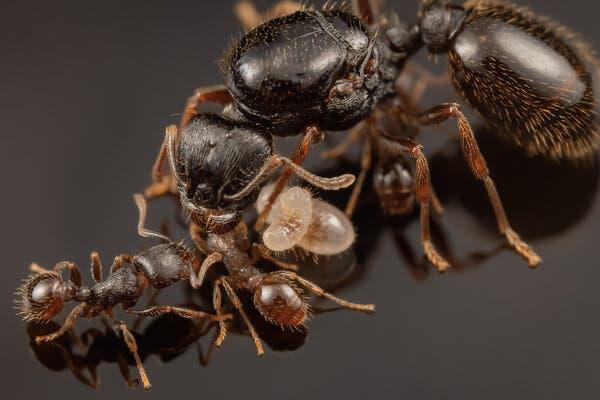 The Ants we encounter around the Estate are almost exclusively female; the males are often described as little more than flying sperm missiles that rarely live longer than 36 hours and are often unrecognizable as ants. Queens are made, not born; fertilized eggs have the potential to be queens or workers, and will develop differently based on what the youngster is fed as she grows, a diet and a future that will be dictated by the needs of the colony.

There are at least a dozen Ant species living within Sanctuary Lakes The three most commonly seen Ants living around the Estate are the Carpenter, the Bull and the House Black Ant 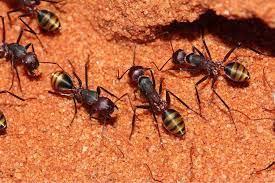 Carpenters are probably Sanctuary Lakes most commonly seen Ant. The interesting thing about their appearance is that they vary from black to dark orange and can have a striped abdomen. They measure around 3mm to 12mm. The size variance is dependent upon what function they play in the Colony

It takes six to twelve weeks for a Carpenter Ant to complete its lifecycle from an egg to an adult insect. Carpenter Ants’ mate during late spring. It’s called a “mating flight” which after it finishes the males die and the females find a place to start their new colony. It can take up to six years for them to establish their colony. Carpenter ants don’t really feed on wood, they just bore into it and then, dispose of the wood outside their nest. They prefer nesting in wooden structures, which makes your wooden shed, decking and even house structures, the perfect place for the Carpenter to build their colony. 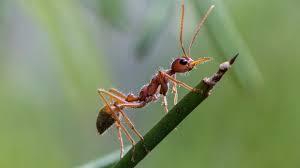 Bull Ants are large and have been known to grow up to 40 mm They have characteristic large eyes and long, slender mandibles and a potent venom-loaded sting. They have superior vision, able to track and even follow intruders from a distance of 1 metre. Many species of Bull Ants have bright red or orange colours on the head or abdomen. A queen will mate with one or more males, and during colony foundation she will hunt for food until the brood have fully developed. The life cycle of the ant from egg to adult takes several months.

Bull Ant nests are usually underground and often hidden within piles of logs, rocks, bushes, and around house foundations. Their nests can extend several metres below the ground. They will aggressively attack intruders of any size that come too close to their nest. 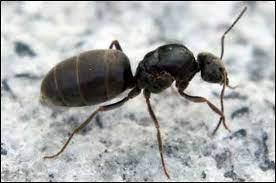 The Black House Ant is most commonly found close to human residences. As the name implies these Ants are entirely black in colour, and measure at 2.5 to 3mm in length. They will typically invade homes in search of food and shelter, so any food or dirty dishes left around will become fair game to them.

Depending on the temperature and availability of food, Black Ants will take around 44 days to grow from a larva into a fully developed adult

Black House Ants have the ability to build nests almost anywhere. For instance, cracks in the foundation, near stone pathways, and underneath the house and always underground.

There are many reasons to understand Ants better. Whole ecosystems are built around them, and large numbers of species, from plants to beetles to birds, are “ant obligates,” meaning that they depend entirely on their relationships with Ant Colonies to survive. For example, all Ants disperse a multitude of herbaceous seeds throughout Australia. It has been scientifically estimated that if we were to remove Ants, it would cause our wildflower abundance to drop immediately by 50 percent.