The January summer sunshine allows us the chance to take leisurely strolls along one of Sanctuary Lakes best kept secrets, the long strip of sandy beach wedged between our Cheetham Wetland and the Point Cook Marine Park. Strangely even on the most perfect of days there are never many people around, which is surprising as it is a truly wonderful walkway. Due to its diverse flora and fauna, there is always something to see. From the wetland’s vast number of migratory and shore birds, the summer carpets of shoreline flowers to the extraordinary sea life darting around the sandy shallows and seagrass fields.

Only a couple of days ago I was walking the beach, taking a refreshing paddle in those very cool sandy shallows when I suddenly saw gently flapping towards me a fully grown, one point five metre Ray. The distinctive mottled patterns on its back immediately told me this was not the very dangerous Stingray but the friendly harmless Southern Fiddler Ray. As I watched it circle towards me, I saw another, then another and another. Suddenly I realised I was standing in the middle of a shoal of some twenty Southern Fiddler Rays.

The Fiddler has a flattened oval shaped body with a very rounded pectoral disc – a shape that is reminiscent of a fiddle or banjo, hence its name. Its colour is a dark yellow-brown. Three parallel grey-white stripes extending from just behind their eyes provides a striking, swirling, contrasting pattern against their yellow-brown body. The Fiddler Rays are also distinguished from other Rays in that the anterior nasal flaps of their nostrils expanded backwards and fused together into a nasal curtain that reaches a slightly convex shaped mouth. Above the mouth lie two very small eyes. The Fiddler’s long slender tail has two small dorsal fins and an asymmetrical caudal fin. An adult Fiddler’s total length, including tail, can be as much as one and a half metres with an average adult weight of six to seven kilograms.

The Southern Fiddler Rays are from the Family Rhinobatida, which also includes guitarfishes and shovelnose rays. Fiddler Rays are sometimes also referred to as Banjo Sharks, Green Skate, or Magpie Ray. Fiddler Rays are not Stingrays (Family Dasyatidae) and do not have a venomous spine in their tail. Fiddler Rays are harmless and easily approachable. However, they do sport a thorny row of denticles (sharp calcified, tooth-like structures) along their back. Although not poisonous, watch where you tread. Fiddlers enjoy shuffling down and hiding just beneath the sand. Which makes it relatively easy to mistakenly step on one. 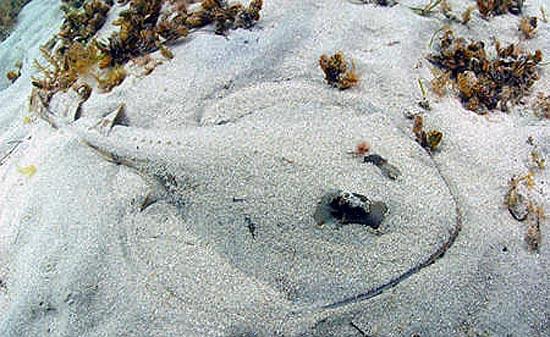 The Southern Fiddler resting beneath the Sand

The Southern Fiddler Ray is common throughout Port Phillip Bay and just like my discovery, they are mostly found close to the sea floor in the shallows where they feed on shellfish, marine worms, crabs, and bottom dwelling invertebrates. Crushing the prey between their jaws and biting them with their small, strong teeth. During the day Southern Fiddler Rays rest by shuffling down into the soft sea floor substrata and in amongst seagrasses of estuarine environments.

Reproduction in the Southern Fiddler Ray is fascinating: they are ovoviviparous – a zoological term meaning the female gestates her fertilised eggs inside her body and then gives birth to live young. The egg capsules of the female Fiddler are reported to be golden in colour, containing up to three embryos each. It gives birth to litters of four to six young per breeding cycle. Southern Fiddler Ray’s main gestation period is 4-5 months. The female can then pause the development of her embryos for another 7-8 months before giving birth up to 12 months after conception! This strategy allows the female to respond to optimum conditions and give birth when ocean temperatures favour rapid growth and prey is plentiful – perfect for giving her babies the best chance of survival. 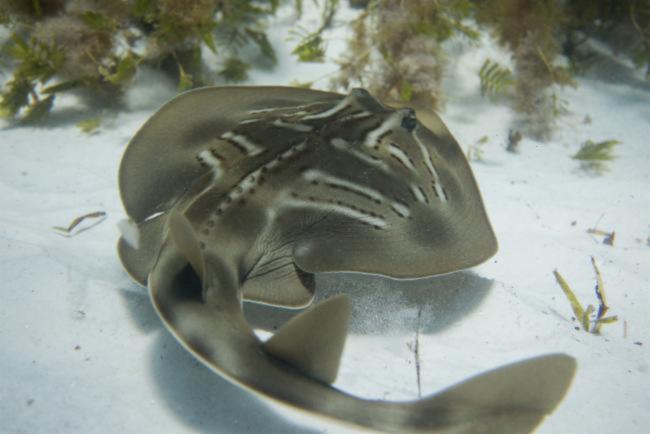 The Fiddler’s camouflage cleverly protects it from predators

The Fiddler has few predators in Port Phillip Bay, Sharks and similar large bony Fish are the only potential marine predators. Even humans seem to be relaxed by them. Although the flesh is considered good to eat, only a small quantity is sold in seafood outlets and it is of minor commercial fisheries interest. The Southern Fiddler is often caught as bycatch in commercial fisheries as well as by recreational fishers. It adapts well to captivity and is often on display as an exotic Ray in many of the world’s public aquariums.

As for my own experience, I stood motionless for over twenty minutes enjoying the tremendous pleasure of observing marine life going about its business, in its natural wild surrounds. After a few minutes they seemed to get used to my presence and occasionally a member of the shoal would slow down from scavenging the seabed and take a moment or two to inspect my feet.

Once again Sanctuary Lakes Beach walkway has given up another natural, unexpected, and wonderful encounter.

Why not give it a go!