Last month I wrote about wandering around the estate looking at our magnificent varieties of eucalypt trees. I was surprised to note that I also saw numerous pairs of Wattle birds feeding greedily on the nectar of almost every flowering eucalypt. Over the years I have become aware that with the maturing of the estate’s eucalypt trees has come a large increase within the neighbourhood of Wattle birds. Almost to the extent that today, they have become one of the most common field birds residing within Sanctuary Lakes.

It is a common mistake to believe that Wattle bird sare connected to Wattle (Acacias) trees. Wattle is one of those English words that has two totally separate meanings.Wattle can mean thin wood branches that are woven into lattice and daubed with sticky material like clay, to produce walls for simple building construction. Early European settlers used the thin bendy branches of Acacia trees for their first home building hence they nick-named Acacias, Wattle trees. This is in marked contrast to the “Wattle” of the Wattle bird. That Wattle describes the fleshy reddish/pink fat which dangles on the side of their necks. Similar “hangs” of distinctive fatty flesh can be seen on other birds such as Cockerels, Turkeys and our northern friend,the Cassowary. Wattles on birds are often an ornament for courting potential mates.
They are correlated to testosterone levels, good nutrition, and the ability to evade predators, which in turn indicates for both sexes, a potentially successful mating.Another adaptive feature of the Wattle which can come in handy in several ways is that on a hot day, with the sun bearing down, the bare skin of neck and wattle helps release excess heat.

Wattle Birds (Anthochaera) are the largest and nosiest species of Australian honeyeaters. Highly territorial and aggressive particularly when protecting their food sources and their young.

Sanctuary Lakes has two species of resident Wattle Bird, the Red and the Little Wattlebird. 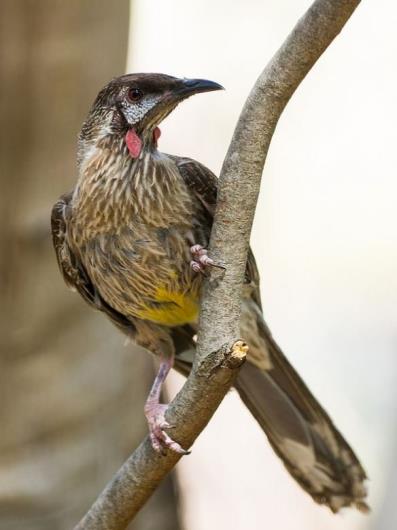 Male and female Red Wattle birds are similar in size and plumage. Adults size range from 33 to 37 cm making them the largest nectar feeding bird in the world. Except for the standout fleshy reddish wattle on the side of the neck which gives it theircommon name, the Red Wattlebird colouring is remarkably sombre,making it an excellent camouflage within their eucalypt habitat. The plumage is grey-brown on the body, with prominent white streaks and yellow on the belly. The tail is long with a white-tip and the strong legs and feet are a grey pink. The face is pale and the down ward-curving bill is black.
In common with other honeyeaters, the Red Wattlebird has a long, specialized tongue to extract nectar from flowers. The tongue can extend well beyond the tip of the bill, and is divided at the end to form a brush-like structure with over a hundred bristles that soak up the nectar. Red Wattle birds will also eatinsects, taken either from foliage or caught in mid-air. Berries and the honeydew produced by some insects add to the bird's diet.

The Red Wattlebird pair throughout the year, with nesting taking place between July and December, though occasionally outside these months, if conditions are favourable. One or two broods are laid each year. The nest is usually located centrally rather than on the periphery of a tree (mainly eucalypt). The nest is small, built simply of leaves and twigs. In fact, when you view one from the ground it looks as though a bunch of twigs and leaves have been caught forked between branches. Normally two to three eggs are laid, incubated by both parents and hatched after 16 –21 days. They fledge 15–20 days after hatching, and both parents continue to feed them for a further 2–3 weeks.

Red Wattlebirds are noisy animals, producing a range of raucous calls. Sometimes the pairs seem to duet, with the male producing a loud cackle and the female a whistling call.The male's cackle is a loud guttural-sounding call, which has been variously described as having a squawking, coughing or hiccuppingsound. The female’s whistling call consists of up to five rapid whistles that may or may not ascend in tone. These calls will carry over long distances and can often be heard around the Estate 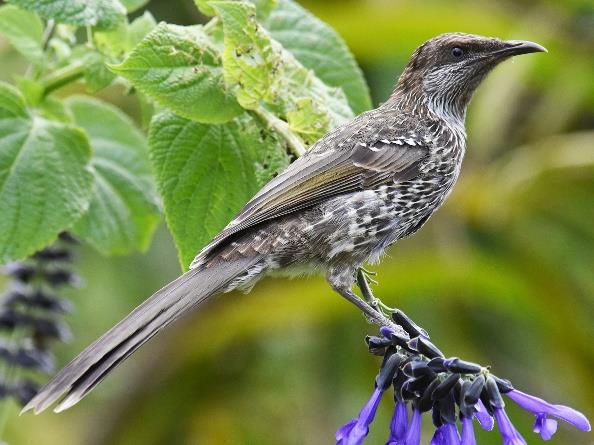 The Little Wattlebird is actually only a couple of centimetres smaller than the Red, the word Little refers not to its size but to its pale tiny, almost non-existent, “wattle”.
Like the Red Wattle, the sexes of adult Little Wattlebirds have similar plumage and are mostly a sombre dark grey-brown, with faint white shafts on each of the feathers. The underparts are grey and are heavily streaked with white. The streaks are finer around the throat, becoming more blotched on the sides of the belly. In flight, there is a large brownish red patch that can be seen in the wings. The eye is a steely blue-grey.

Both Wattlebirds feed mainly on nectar and like the Red, the Little has a similar long brushed tipped tongue for probing into flowers.

Little Wattlebirds can have a double breeding season, first in the Spring and again in Autumn when many of our eucalypts come into flower. Often,they lay only a single egg.The female incubates the eggsalone, butboth sexes care for the young chicks.The male is protectively aggressive and noisy to any birds who might stray close to or around the nest and the young.

The Little Wattlebird has a very distinctive call. It is always difficult to accurately describe calls, but the Little Wattlebird cry is a bit like a screeching heavy metal, rock and roll singer and an old wooden cuckoo-clock. Firstly, it imitates the ticking of the clock with wild clicks and then screams out a large cuck-cuck-koo sound, which sometimes seems to go on repetitiously for hours at a time.

The Red and Little Wattlebird are very successful Australian native birds. I am sure they will become great neighbours but I hope they might learn to hold back their first cuck-cuck-koo until dawn has started and if possible,not quite so close to my bedroom window. 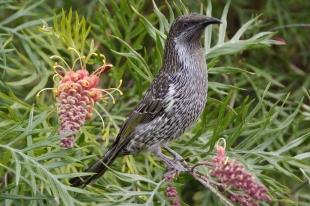 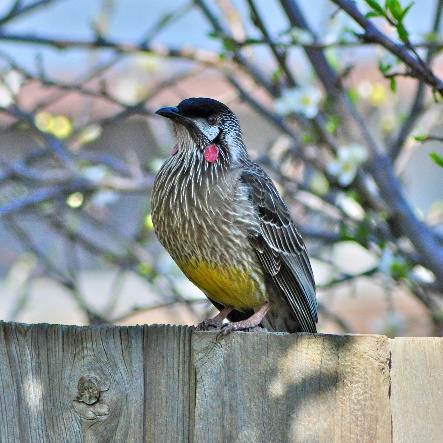